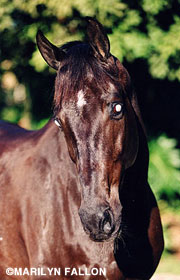 Soon after Valiant’s dressage evaluation and pre-purchase diagnosis, we relocated from California to our new farm, Centaur Farm, in Florida. One day while walking out to the arena Valiant stepped on a horseshoe nail. The veterinarian was called and the sole of Valiant’s foot was thoroughly cleaned and medicated to prevent infection. Penicillin was administered and prescribed for five days. A few days later, abscesses developed where the injections were given on both sides of Valiant’s neck. I noticed his eyes were cloudy at the center near the pupil. To this day it is a mystery as to what actually caused this infection. It could have been a reaction to the Penicillin, a problem with the Penicillin itself, the manner with which the shots were given, a contaminated needle or the bacteria from the horseshoe nail.

This was the start of a raging infection inside of Valiant that nearly killed him. Valiant had the worst form of UVEITIS or “Moon Blindness”. 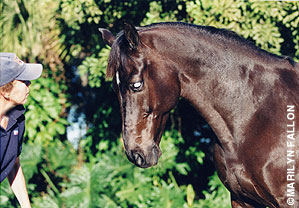 After overcoming this life-threatening experience with Valiant, we were faced with the next challenge, life without sight. I still remember that day at the University of Florida after Valiant’s eye examination. The specialists told me Valiant would never see again and my options were to turn him out in a pasture without trees the rest of his life or put him down. I felt lost and helpless. I couldn’t replace his sight but I knew somehow I could give him a good life. I didn’t know how I was going to do it but after Gary, my fiancé’, said, “He’s not lame, is he?”, the answer appeared. Gary was right. Valiant was healthy in every way except he couldn’t see, but I could. How could one even conceive of discarding such a wonderful, vibrant animal. I went through this thought discovery process in my mind then I felt for the first time in my life, the universe was presenting me with a very serious decision and opportunity. I either step up to the plate and take on this challenge, learn and grow from it or take the easy way out and move on without him. I always felt there were reasons for everything in life but at that time this one was real hard to find. I wiped the tears away and decided the only solution was to train and ride him. Upon leaving the hospital after the diagnosis, the doctors asked me what I was going to do with Valiant. I told them, “Train him to the highest level of dressage that I possibly can.” I’m sure they all thought I was crazy but wished us well. 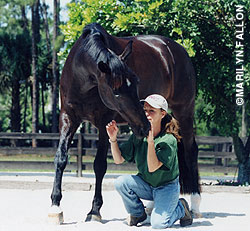 This was the beginning of an experience of understanding horses in a whole different way. In order to communicate with Valiant, I had to understand him and all his natural tendencies including his fears, needs, comforts and individual idiosyncrasies. Becoming quiet within myself and watching his body language was the key.

Initially during the first few years I did instinctively what I felt was right in training him.

Valiant would slowly and methodically circle his stall, making sure the area was safe and obstacle free. He would stretch out his neck and feel his way with his chin and eyebrow hairs.

It was all common sense thinking through everything I did from taking him in and out of his stall to loading him in the trailer. At first, Valiant was terrified to leave his stall. He would sense the sides of the door opening and would either bolt out or refuse to go. He would bang the sides of the door, scare himself and run me over. Leading him was an unpredictable event. His hearing became his sight and the slightest noise would put him either on top of me or bolting forward in flight. Loading him in the trailer was a slow process step by step. He eventually understood the pitch of my voice would indicate whether he was going to step up or down. I would repeat the word “up” in a higher pitch voice and the opposite for “down”.

I had good success but eventually needed more input so I reached out for help from individuals I respected and who had a lot more ground horsemanship experience than I. James Morgan, a local western horseman nearby in Loxahatchee was instrumental in helping Valiant adapt to his new world. James gave me the confidence I needed to work through this very important and very difficult time. In his mind there was never a doubt we could do it. Thank you, James. 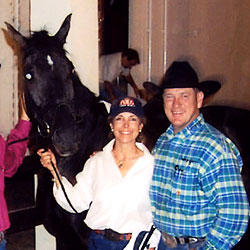 As Valiant and I progressed year by year, another individual who personally added to our progress was John Lyons. Not only was John one of the most famous horse communicators in the world, he had a totally blind horse as well. Zip, his best equine friend and partner, became totally blind a few years earlier. John had first hand experience of what I was going through. John, thank you for all the time, patience, kindness and consideration you extended to Valiant and me. Your knowledge has been invaluable to us.

All this ground communication I learned helped make the riding communication happen. Riding Valiant presented all kinds of new challenges but at least I understood where his mind was, at least I sort of did most of the time. That’s an advantage to not understanding it at all. Now I had to understand what his body needed, then how it related to his mind. At first I didn’t know what Valiant would do with my weight on his back. Yes, I was terrified. Yes, my life flashed before me. Yes, I was human and focused on my fears and the unknown reaction of getting on him for the first time after his blindness. Gary, my fiancé’, held the lead line, steadied Valiant and I put my foot in the stirrup. Valiant took a few steps sideways then settled down. I lifted my leg up over the saddle and gently settled in the seat. It was a moment I had to pull together and remember everything I ever learned about dressage and apply it with great sensitivity. Once in the saddle, the focus shifted from my fears to Valiant and his needs. Valiant swayed from left to right trying to find his balance with my 110 pounds on his back. A calm came over me and I tried only to be a part of him and stabilize his wavering body with my balance. We took a few steps forward and then Valiant stumbled falling into Gary. Gary was pushed out of the way and Valiant went to his knees. I leaned back and helped him regain his balance. Gary took the lead line and we continued our walk very slowly and carefully step by step. This session was the start of our new relationship as a team. We somehow gained confidence in each other and I took on the new role of Valiant’s seeing-eye person. 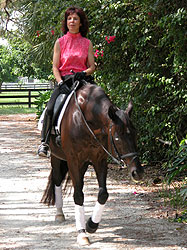 Many months, many years and many amazing stories passed while our relationship was becoming closer and closer. It was great riding him in the controlled environment of an arena but that got a bit monotonous especially for the exuberant Valiant. I needed to keep his mind and body busy working on something, so the classical art of dressage it was! At first it was not a pretty sight. Walking him in a straight line, much less trotting him and not even thinking of the possibility of cantering him was virtually impossible. Balancing and giving him confidence were the two main issues and still are, only now on a different level.

Eventually it seemed to me we were getting the dressage thing down good enough to at least get a 50% on a training level test and not leave the arena unexpectedly until the test was over (if you know what I mean). 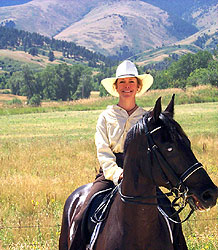 I felt Valiant now needed a new challenge. Gary and I took all our horses to Wyoming that summer and Valiant learned to be a trail horse. I mean a real trail horse riding up and down the Big Horn mountains. We crossed the Little Tongue River on numerous occasions, and even rode with the polo ponies at the Big Horn Polo Club. This was a summer to remember and it solidified our bond. We were having a great time learning about each other. Valiant also acquired another friend, Rolando my Grand Prix horse. Rolando became Valiant’s seeing-eye horse. It was pretty amazing how Rolando took care of his buddy in the small pasture.

This Wyoming summer experience was a turning point not only in our personal relationship but in our riding relationship as well. We worked diligently on our dressage the rest of that year. Valiant was only trained to training, first level when he went blind and I needed to confirm that level before I moved on. The following year we were able to do second and third level movements fairly well and by the beginning of the 2000-2001 season I felt he could go fourth level, so we did. Valiant had never been to a horse show before and we were going to do fourth level. As I look back now, that sounds a bit challenging! Was I crazy? I guess when you’re in the moment and the moment feels right you go with it.

These are a few of so many stories, training and learning experiences along our journey, too many to really tell now, but it all comes down to one word, “trust”. That one word means so many other words as well. Love, patience, courage, hope, communication, commitment and mutual respect are but a few of them. In my mind, Valiant is just another way how the universe works when you have faith. 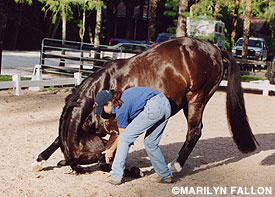 In order to bring this story of trust, hope and courage to others, Valiant and Jeanette will be starting a vocation of performances at select equestrian functions in order to benefit
THE VALIANT TRUST.