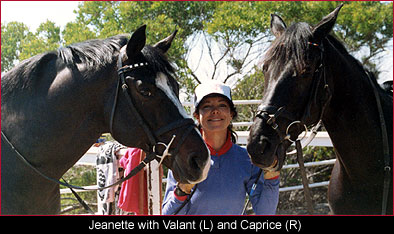 Valiant was sired by Valant a stunning, gentlemanly, black Dutch stallion with four white socks and a blaze. The dam was an understated, elegant, pure black Westphalian/Trakehner mare named Caprice. I owned the pair and felt they would create a beautiful baby for the future.

That sweet, healthy, happy, energetic little guy I named Valiant was developing into a cocky, free-spirited youngster way too smart for his age and way too smart for his own good! That’s right, novice me at that time wasn’t sure how I was ever going to tame this wild horse. He had his own agenda. Guess my imprinting didn’t imprint too well, or maybe it did! In any case I had my work cut out for me from the start.

Valiant was one of seven horses I owned at that time and the other six were in various stages of training; needless to say so was I. Determined to learn the art of dressage as fast as I possibly could, I rode, took lessons, rode, took lessons incessantly. Valiant took a back seat when it came to my attention and time as he was the youngest and still growing up.

When Valiant was two years old, I invited a well-respected German dressage trainer to evaluate Valiant’s potential and suitability as a dressage horse. There we were at the bottom of a mountain looking up to the top at five horses. I whistled, they all perked their ears and began their descent. Four of the five horses made their way down the usual way on the long traversing pathway. The other one, Valiant, took the shortest distance between two points and shot straight down the mountain using the bushes and large boulders as flagged gates just like a giant slalom skiing course. He came to a skidding stop in a huge cloud of dust right in front of me. The German trainer dove for cover and later pronounced Valiant unsuitable for dressage. Quote, “He’s crazy and too small. Get rid of him now. He’ll never do.”

Reluctantly, I put him up for sale and the potential buyer did a pre-purchase. Valiant did not pass the vet check. Why? Because he moved strangely according to the vet. “What do you mean?” I asked. “He snaps his legs especially his hind and his toes slightly drag the ground.” She felt it could be a degenerative disease that could be a “loss of use” case one day.

I couldn’t believe it. I had a German trainer telling me he’s crazy and too small, and a vet saying he had a degenerative neurological disease. That did it. I guess I was destined to be “challenged”. I didn’t believe either of these experts so I’ll just do it my way and prove them both wrong someday.