Music is and always has been a huge part of Valiant’s journey. There have been several incredibly talented musicians that have performed and created music inspired by Valiant and his story. This page is a tribute to their efforts and a special thank you to the music that they have contributed in honor of Valiant.

Sonny Throckmorton is one of the most successful songwriters in country music, with over 1,000 of his songs having been recorded by such artists as Tanya Tucker, Dave & Sugar, Merle Haggard, Jerry Lee Lewis, the Oak Ridge Boys, Doug Stone and even comedian George Burns.

In 1975 during a period of nine months, over 150 of his songs were recorded, including “Thinking of a Rendezvous,” Johnny Duncan’s first number one hit. Another of his songs, “Knee Deep in Love with You,” became a country standard. Between 1976 and 1980, a Throckmorton song appeared on the charts almost every week. His 1978 hit for Jerry Lee Lewis, “Middle Age Crazy,” even became the basis of a major movie by the same name, and he was named Songwriter of the Year by the Nashville Songwriters Association three years in a row between 1978 and 1980. Throckmorton’s stature as a major songwriter flourished and in 1980, he was named BMI Songwriter of the Year. Seven years later, with innumerable hits under his belt, he was inducted into the Nashville Songwriters Hall of Fame.

Sonny has written several songs that have been a part of the Valiant project including “Life is a Horse” which was recorded by himself and also recorded by the legendary Willie Nelson, “This Side of the Mountain”, and “Ride Me Back Home”. Click Below to Listen to these songs. 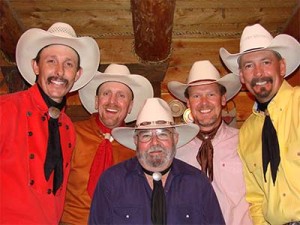 Some folks call it a western music show; some call it a stand-up comedy show with masterful cowboy music; others call it the best musical experience in the west.  Call it what you want – the fact remains – The Bar J Wranglers from Jackson Hole, Wyoming, deliver some of the purest harmony, best musicianship and funniest ranch humor ever seen on stage.  As soon as the Bar J Wranglers take to the stage, listeners leave behind their busy life and settle into a time long ago – a time of the singing cowboy.

The Bar J Wranglers have performed nationwide with outstanding performers such as Roy Rogers, Randy Travis, Sons of the Pioneers and others.

Eric Bikales studied classical and jazz piano and flute in the Kansas City area, eventually majoring in music composition at the University of Kansas. He won a competition to be guest soloist with the Kansas City Symphony at age eleven, for a series of children’s concerts. Eric moved to Los Angeles in 1976 at the suggestion of Mike Post. After heading west, Eric wound up playing keyboards and flute on many recordings and TV shows while pursuing his career as a studio musician. “I’ve always written music” says Eric who studied with Albert Harris and several other orchestrators in L.A. while Mike Post put him to work writing for many of his prime time TV shows. Performing live has always been a part of Eric’s musical world. Still touring with a variety of different artists, as well as performing solo piano. “Diversity has always been a major draw for me” says Eric, who plays and writes music in styles ranging from classical to jazz, and everything in between. Over the years, Eric has written film scores, TV show themes and underscores corporate video scores, music for libraries, radio and TV jingles, commissions from major universities and equestrian performances. He has made four of his own solo CDs for Moodtapes in L.A. Eric has had several of his vocal songs recorded by pop artists ranging from Lisa Hartman-Black to Cory Stevens. Having received his degree from Belmont University Eric resides in Nashville, Tennessee and spends a good part of his time writing and recording in his project studio. Eric is currently working on a solo piano project. He also teaches keyboards privately and is an adjunct instructor with the Academy of Art University, San Francisco,CA.